Paintings of people are certainly one of the most explored subjects of art history, giving birth to many of the world’s most celebrated artworks. People at gatherings, celebrating, creating art, or perhaps just posing for their portrait; paintings with people are able to show so much about a time and place, about culture and human manifestation. This article will explore some of the most famous paintings of people in art history.

A Sunday Afternoon on the Island of La Grande Jatte (1884)

Georges Seurat’s striking “A Sunday Afternoon on the Island of La Grande Jatte”, created in 1886, is a masterpiece of the Pointillist technique and one of the most gorgeous paintings of people. Tutored at the Ecole des Beaux-Arts, Seurat diverged from his contemporaries and developed a new approach to color theory. Briefly moving to La Grande Jatte, he was greatly inspired by what he regarded as an icon of emerging modernity; a gentle riverbank where the more affluent residents of Paris would come for short day trips. The artwork is a remarkable example of how to create chromatic ranges by painting small, sharp dots of pure color.

Without a doubt, Michelangelo’s “The Creation of Adam” is one of the most recognizable paintings of people in art history. Thematically, Michelangelo represents the Biblical narrative in which God breathes life into Adam, the first human. Rivaled only by the Mona Lisa in popular praise, the Creation of Adam and the tiny gap between God’s and Adam’s hands is a breathtaking and moving symbol of the story of humanity. This striking image has been the subject of numerous homages, imitations, and parodies – a testament to its lasting effect on humanity’s visual consciousness.

Pierre Auguste Renoir’s “Luncheon of the Boating Party” is a rich celebratory painting. Reveling in the joys of youth, people interact with each other, suspended in light and time in this spontaneous painting of people. The subjects were Renoir’s close circle of friends with some famous art people, such as Gustave Caillebotte. They are sharing wine, conversation, and jokes on the balcony of a restaurant in Chatou, near Paris. An idyllic and optimistic view of French society in the late-19th century, the artwork depicts a particular establishment that welcomed a range of social classes. 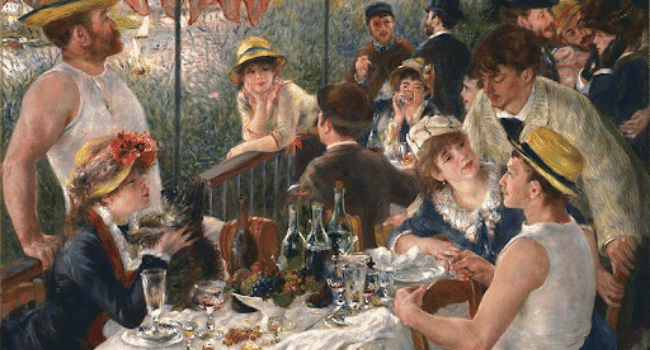 Jean-Francois Millet’s iconic “The Angelus”, finished in 1859, caused a storm of appreciation upon its exhibition, skyrocketing prices of artworks by the Barbizon School. In a gloomy and expansive field, a man and woman recite the Angelus, taking a break from their work digging potatoes. Painted from a childhood memory, Millet’s glorious painting is not a mere enunciation of faith. Instead, the masterpiece’s real focus is on rural life, capturing a momentaneous breath in an eternity of work. The contemplative look on the face of his subjects embodies a tender and empathetic eye for peasant life that was rare for paintings with people at the time. The painting is a famous art of people, real people. 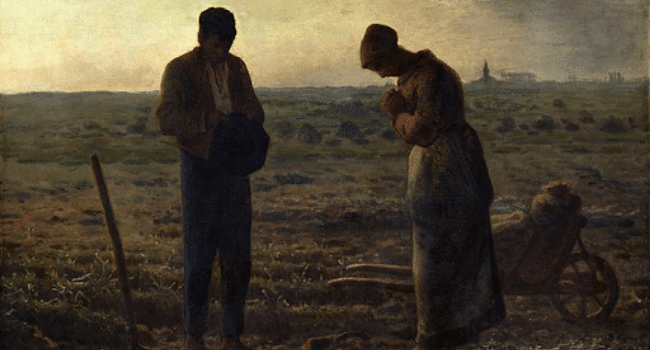 Diego Velazquez’s 1657 artwork “Las Meninas” is a famous people painting; it’s truly enigmatic and has been much analyzed. It features the daughter of the King of Spain surrounded by her retinue, all gathered together and oblivious to the artist. Now at the hanging Museo del Prado in Madrid, “Las Meninas” is many things in one masterpiece: it is a play on the viewer’s position in regards to the painting, it is a self-portrait, a figurative reproduction of the King’s daughter, and a court genre scene, capturing the fascinating visage of the court. 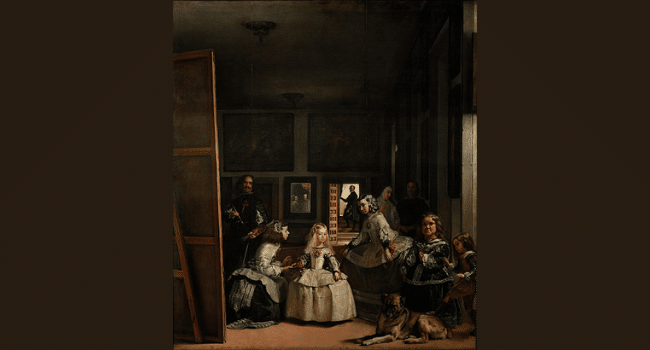 “The Rehearsal” is quite an unusual artwork. It is an oil painting made between 1873 and 1878; while Degas experimented with various media and leaned towards Impressionism, this piece presents several Academic characteristics. However, what stands out aesthetically the most is the accuracy of details, not only on the rehearsal scene that names the work but also on the details outside the window. 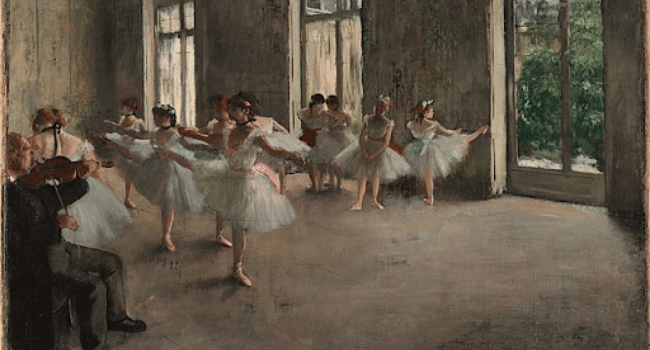 Leonardo da Vinci’s 1498 painting “The Last Supper” is certainly one of the most recognized and famous paintings of people in the world. It presents us with thirteen figures divided into smaller subgroups. Christ, the central figure, is isolated, backlit, and the point to which all lines in the painting lead our eye.

The painting is balanced, with the figure of Christ providing the stability of an equilateral triangle. He sits below an arch, which, if completed, would create a circle, a halo, around his head. In Greek geometry, well known to da Vinci, the circle represents heaven, and the triangle, earth. Here Christ is subtly celebrated as heaven on Earth; God made man.

Jacques Louis David’s “The Death of Socrates”, created in 1787, is a masterful imagined reproduction of the forced suicide of the eminent philosopher. The painting shows his calls for more significant public discussion, as Socrates was condemned to banishment or death by the government for openly preaching his methods in the public sphere.

Rejecting a life of banishment, the philosopher chose to drink from a cup of poison surrounded by his friends and associates. David decided to juxtapose the rigid certainty of the central protagonist with the shock and horror of those that surround him. 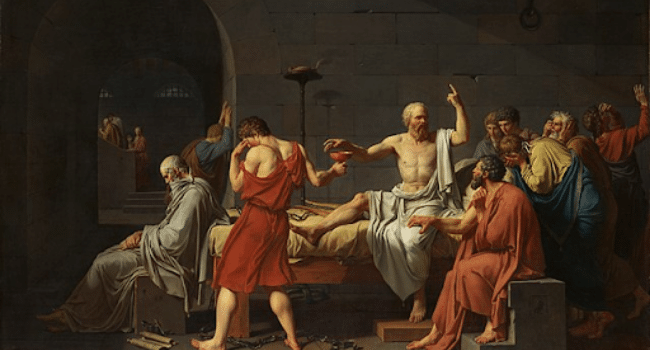 There is no doubt as to why this selection represents the most famous paintings of people in the world. The possibilities are endless for artists portraying our history through the image of humankind, and the great painters of the past knew exactly how to create the perfect paintings of people.