In the Spring 2021 Budget, ex-Chancellor Rishi Sunak announced that the duration of loss relief carry-back period for corporation tax is to be temporarily extended up to three years, in response to the massive financial impact COVID-19 pandemic has done to a lot of businesses in the UK.

Whilst in the Autumn Statement 2022, the new Chancellor Jeremy Hunt finalised the new corporation tax rate to be fully implemented in April 2023. The new rate aims at helping smaller businesses and the high street, making the highest earning companies pay a larger share of ta through a variable tax rate whilst maintaining the small profits rate of 19 per cent.

The new corporation tax rate will range from 19 per cent (lower threshold) to 25 per cent (higher threshold), as opposed to the former fixed rate of 19 per cent for businesses of all sizes. This sounds like a very fair tax reform as smaller businesses are struggling to keep up given the current economic situation in the country. You can also learn more about corporation tax payment plan.

Nevertheless, this tax rise is still the lowest amongst all the G7 countries but will suffice for the country to remain internationally competitive. The good news is that the new government is fully on the side of smaller businesses and the high street, focusing on providing them with support through reasonable means. 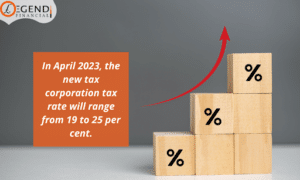 Businesses may want to report their loss and claim reliefs now so they can take advantage of the 25 per cent tax relief. This article aims to inform businesses how they can maximise various supports the government offers them, including claiming relief on their trading losses through reduced corporation tax rate, marginal relief, and other support coming their way.

Companies that suffered a trading loss (allowable expenses are greater than income) due to the pandemic can now claim loss relief for up to three years through their company tax returns, helping them to reduce their corporation tax. Specifically, the temporary extension of loss relief applies to losses incurred between 1 April 2020 and 31 March 2022.

They can only offset their trading losses against allowable expenditures, which include costs on finance, marketing, stock and raw materials, printing, postage, and stationery (PPS), overheads, staff and subcontractors, travel and subsistence for the business, and capital investment allowances.

A cap of £2 million worth of loss is applied each year. Moreover, there are various options to claim their reliefs for corporation tax on losses. They can offset the loss against the current year, carry it back to the previous years, or carry it forward to future years. 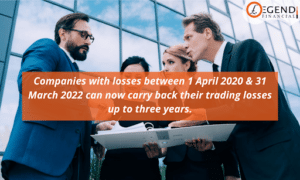 Group companies can also claim group loss relief where they offset their losses against other members’ profits. Claiming terminal loss is another option, which applies to companies that suffered losses from the previous 12 months, resulting in the need to cease the trade. Through terminal trading loss, companies are eligible to carry their trading losses back up to the last three years.

Marginal relief has been in the UK tax system for several years, which aims to help companies with taxable profits that are between the lower and upper threshold. Just like the loss carry-back relief, marginal relief is also intended to reduce the amount that companies have to pay on their corporation tax.

Specifically, companies may be eligible to claim marginal relief when their taxable profits are between £300,000 and £1.5 million before 1 April 2015. In the case of one or more associated companies, the limits are divided by how many they are.

For companies with accounting periods of 12 months, they will pay their corporation tax applied with marginal relief through four equal instalments, which are as follows: 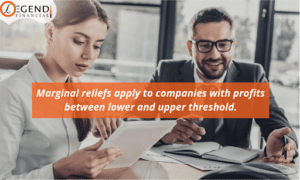 Other Means of Government Support

In the Autumn Statement 2022, Chancellor Hunt declared that financial support would be focused on smaller businesses and the high street. Aside from increasing the corporation tax rate for higher-earning businesses to up to 6 per cent, the UK government currently directs its help toward investors to encourage them to invest more and grow.

To make this possible, the government has now set the Annual Investment Allowance (AIA) at a fixed amount of £1 million, the highest fixed level. This then allows 99 per cent of businesses in the UK to make investments up to that massive amount without having to pay taxes.

Another means of government support for businesses amidst the increasing tax rates is to provide them in the next five years with £13.6 billion help. Even with the focus on helping smaller businesses, Chancellor Hunt nevertheless reduces the additional rate threshold to £125,140. Formerly, it was £150,000.

Now that the government is increasing corporation tax rates and making the system stricter than ever, you need to be more proactive about knowing the available tax reliefs there are and claiming them once eligible, as much as possible. Seek help from tax experts such as Legend Financial so you can make claim reliefs to the maximum.

Buying Life Insurance for Your Parents? Here are Things You Need to Know

How To Do Life Insurance – Step By Step Guide