Who were the Green Children Of Woolpit?

The Legend Of Green Children Of Woolpit 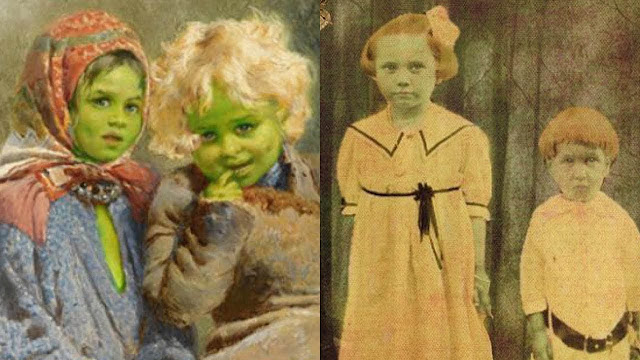 LOCATION :  Woolpit in Suffolk, England.
During 12th Century, perhaps during the reign of King Stephen an event occurred which is perhaps the most unexplained mystery till today.
WHERE IS WOOLPIT?
The account is set in the village of Woolpit located in Suffolk, East Anglia. In the Middle Ages, it lay within the most agriculturally productive and densely populated area of rural England. The village had belonged to the rich and powerful Abbey of Bury St. Edmunds.
STORY : On a Sunny day the villagers of Woolpit discovered two children, a brother and sister, beside one of the wolf pits that gave the village its name.Their skin was green, they spoke an unknown language, and their clothing was unfamiliar.
The pair refused all food for several days until they came across some raw broad beans, which they consumed eagerly.The children gradually adapted to normal food and in time lost their green color. The boy, who appeared to be the younger of the two, became sickly and died shortly after he and his sister were baptized.
SOURCE
WHAT HAPPENED NEXT?

After learning to speak English, the children the surviving girl, explained that they came from a land where the sun never shone and the light was like twilight. She called her home St Martin's Land and adds that everything there was green.

According to William, the children were unable to account for their arrival in Woolpit; they had been herding their father's cattle when they heard a loud noise and suddenly found themselves by the wolf pit where they were found.
Ralph says that they had become lost when they followed the cattle into a cave and, after being guided by the sound of bells, eventually emerged into our land.
The story of the green children has endured for over eight centuries since the first recorded accounts. While the real facts behind the story may never be known....
PLEASE SHARE THE POST IF YOU LIKE AND COMMENT YOUR THOUGHTS.
CHECKOUT FULL ARTICLE ON MY BLOG:   https://mybookofmysteries.blogspot.com/p/the-legend-of-green-children-of-woolpit.html
Answer
Add a comment