Bhangarh: the most haunted fort in India 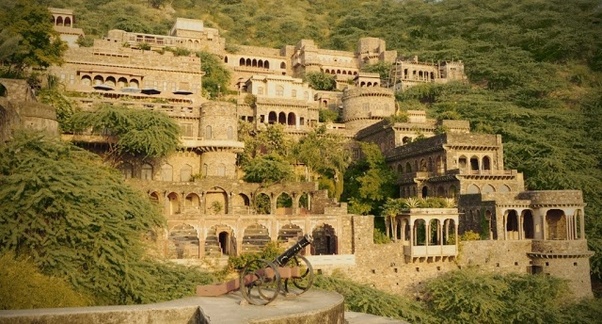 HAUNTED : The fort is regarded as a haunted place and is restricted after the sunset; there are minds who want to witness strange activities. Two boys from the neighboring district of Bhangarh decided to night stay in the fort but never returned. Another guy decided to visit the fort at night and fell in the mid fort located well. He was rescued immediately by friends and while rushing to the hospital the car met with an accident and all three died on spot.

ABOUT : The Bhangarh Fort is located on the border of the Sariska Reserve in the Aravali range of hills in Alwar district of Rajasthan. The nearest village is Gola ka Baas.

The fort is situated at the foot of the hills on sloping terrain. The ruins of the King's palace are located on the lower slope of the hills; trees surround the pond area and a natural stream falls into the pond within the premises of the palace. 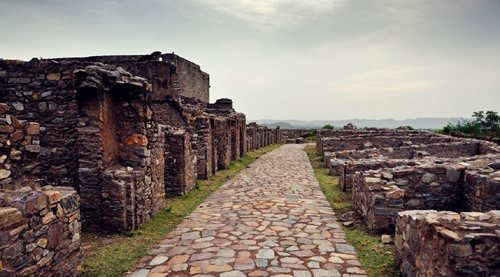 HISTORY : The town was founded in the late 16th century during the rule of Bhagwant Das for his second son Madho Singh. He was the younger brother to Man Singh I, Emperor Akbar’s general. The next to rule Bhangarh was his heir Chhatr Singh.

In 1630, after Chhatr Singh died, Bhangarh declined slowly into the ruins that stand there now. When, after the death of Aurangzeb, the Mughal Empire became weaker, Jai Singh II conquered Bhangarh in 1720.

Even after this Bhangarh continued to diminish in population, and after the famine of 1783 the town has remained abandoned.

Entry Prohibition by Government of India at night 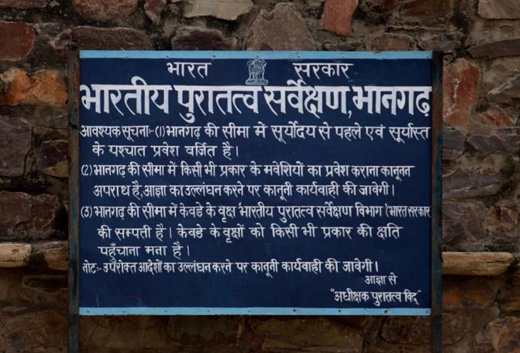 Notice Board by Government of India at Bhangarh

“Entering the borders of Bhangarh before sunrise and after sunset is strictly prohibited.”

There are a numerous legends associated with the fort of Bhangarh, some famous legends told by the local villagers are of 'Guru Balu Nath' and 'Princess Ratnavati and Singhia (a black magician)'

According to Legend the city was cursed by Guru Balu Nath. He had allowed the construction of the town on one condition that the shadow of the city not touch him or else the city shall be no more.

Not heeding the warning, a descendant prince raised the palace to cast a shadow on Balu Nath’s retreat. He cursed the town and since then the city has not been habituated. Balu Nath’s samadhi (burial place) is said to be there till this day.

2.] Princess Ratnavati and Singhia (a black magician) - The Main Story 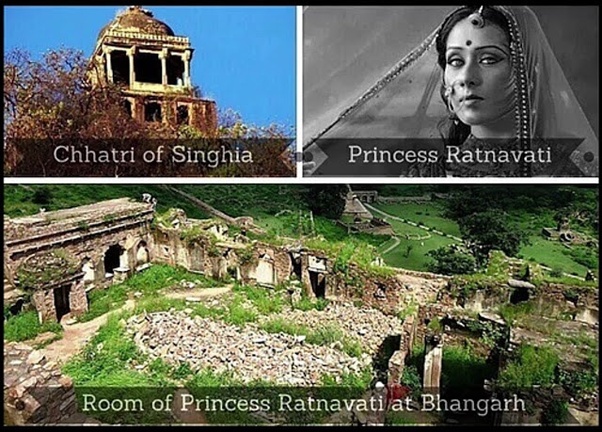 Another story about the city mentions the Princess of Bhangarh, Ratnavati. She was considered to be the jewel of Rajasthan. As soon as she came of age she started receiving marriage proposals from princes of different provinces.

There also lived a Tantrik, an expert in black magic, who fell in love with the princess. He name was Singhia. Knowing he couldn’t gain the princess’s favor nor marry her, he devised a plan to get her attracted to him.

In his dying breath he cursed the palace and all those who lived in it with death. There was a battle a year later between Bhangarh and Ajabgarh in which the princess died. There are tales of ghosts still haunting the place. And some even say that that is the reason for the government barring all entry from the city.

The locals believe that the princess has reincarnated and the fort and the empire of Bhangarh still waits for her to return and put an end to the curse.

Apart from being haunted, Bhangarh is site of great tourist attraction in Rajasthan.

MUST VISIT : Facts about Bhangarh Fort in India (FOR FULL ARTICLE)